The cat named Frost (a.k.a. Sir Frostalot, Frosteefreedeeleefroodeleefroo, Stumpy, Nothing But Trouble, and briefly as a kitten before we got him "Cracker") was hit by another car this morning and killed.

Not much more to say, I suppose, since few of you ever met him, and fewer still would really care that much. But it's my fucking blog.

He was a bit dim, but very fucking tough for such a small cat. Born in late 2010, he'd been under general anaesthetic over a dozen times. He ate poison mushrooms as a kitten and had to be rushed to have his little stomach pumped. When he got neutered, he ripped his stitches out and almost bled to death (and rushing to deal with that lead to my largest ever speeding fine). He was viciously attacked by one or more evil neighbour cats 3 or 4 times, with deep bites and scratches all over. And he was hit by cars twice! We've had 2 big, tough dogs killed by cars along this same stretch of road in the 1990s, neither lucky enough to survive a single hit. Frost was mighty.

Fucking shit drivers. Only 1 out of those 4 ever stopped and told us what happened. Today's driver didn't.

I've got dozens of photos of Frost with cone collars and stitches and missing fur and pipes sticking out of his head. He had no tail for the last 2 months and was still fairly incontinent. He was a wreck, often. But always a lovely, friendly, soft, little boy regardless. 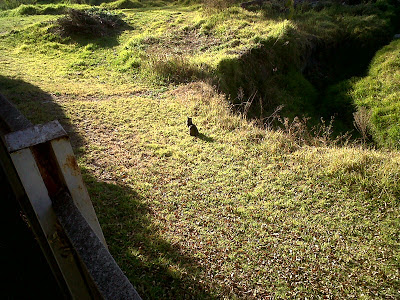