On the Facilitation of the Utilisation of Bullshit

I was offered a great bargain on a peace-building (or conflict transformation, as they call it) course and leapt at it. Today was day 1 of the 5-day course, and these are my initial, unprocessed thoughts. I'm tired, grumpy and a bit disappointed, which will likely colour my assessment.

First, it was certainly professional enough. I've had far, far worse. The venue's nice (not their fault the weather's so shitty hot), the manager took interest in my vegan needs (though someone fucked up communicating that there'd be me and 2 vegetarians, so it was dumb luck that lunch was edible), and the course materials are all decent quality.

What annoys me, more than anything, is how incredibly dull it's been. I'd been a bit fearful, expecting something really challenging and well out of what I'm used to (I haven't formally studied anything like this in 5 years, nor worked in it), with towering intellectuals mocking my inexperience as they passed around concepts that I could barely identify. Instead, it's been piss easy. The other participants are all bright enough, and mostly more experienced than me - almost all are from other African countries, where conflict is more real and pressing - but I get the impression that nobody's taken it as seriously as me, and that a few even view it as some sort of holiday. And the two main lecturers, or whatever the term is, the only speakers we had today, frankly aren't up to my standards. When I asked challenging questions, rather than opening things up for discussion, they were more eager to railroad us back onto their prepared lesson. There were scheduling problems, and I blame it on the wanky time-wasting activities they gave us in place of serious teaching. Badly communicated activities too, so that half of us didn't actually get what they wanted from us. It's all a bit baby-level.

I'm hoping, though, that this was just the first day intro crap. Tomorrow, we're getting a real professor (head of my old Politics department, though he only arrived after I'd left, so I've never met him) and then a tour of the Apartheid Museum, which should at least be more interesting. Then I'm GMing my regular weekly WFRP game immediately after that, so I hope the heat doesn't kill me.

Alice Who? A Review

It's been a slightly crazy couple weeks for me, with all my usual patterns jumbled up, and next week is going to be even worse, as I'm off on a course that I'll write about later. 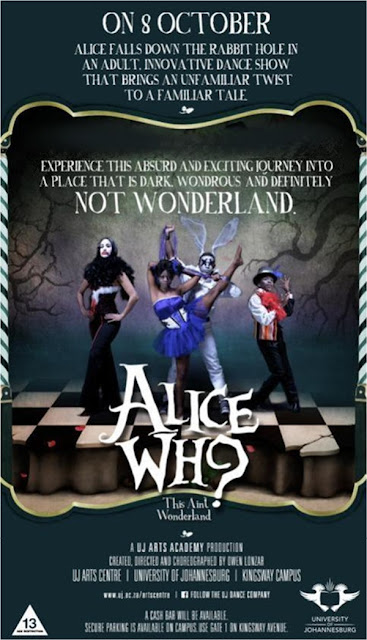 One recent thing I did that I felt worth writing about was a dancey performance wossname I went to, for my friend Kobie's birthday. It was Alice Who? This Ain't Wonderland, performed by a bunch of Uj dance students at the Uj Arts Centre. This is at the Kingsway Campus, where I spent 4 years studying and am technically still currently studying (though the last time I went in for academic reasons may have been as far back as 2009), and yet this was the first time I'd set foot in (or even at all near) the Arts Centre. I watched them build it, I think in my 2nd and/or 3rd years, and I still couldn't have told you a thing about what was inside there. The theater part of it, it turns out, is quite nice, retaining the bare concrete look of the rest of the buildings, but still managing to look a bit sophisticated and clean.

The performance itself was pretty fucking cool. I don't think I've paid to watch dancing ever, not because I have anything against it, just that I never have. But this was visually amazing, with colour and movement and shit all working together seamlessly, and it impressed the pants off of me. Totally worth the cost (and cheaper than some movie tickets). I think, with all the conveniences of modern 3D animation and other technological wossnames (you may have noticed, I'm a bit out of my depth on the technical details), you'd still struggle to make something look as impressive and enchanting as the "simple" movements of just people alone. It was simply really well planned and executed, by someone who'd thought very hard about how the end result would appear to the audience. The dancers themselves were also obviously really good, to pull off some really complicated shit and make it look effortless. I have nothing but praise for the dance side of this dance performance.

The only weird bit was the plot. Be warned, spoilers will follow, though this isn't really the sort of thing you watch for the plot. From the title, you should have guessed that it was a variation on Alice in Wonderland, but it seems I got a totally different interpretation of this modified story than anyone else. Officially, and it seems everyone was just happy to take this as given, 'Alice Who?' was a drug tragedy, with the White Rabbit representing drugs and with Alice slipping between reality (where she had some vague relationship trouble) and "Wonderland" (where interesting things happened).

I can kind of see how you might have read it all that way. But bear in mind that it was entirely wordless, and so there was plenty of room for interpretation beyond the obvious, physical stuff (which, remember, was all dance, not the clearest form of communication). I got quite a different plot, and I think I can show that my interpretation fits the performance far better than just, "Alice is on drugs, drugs are weird, plus there's bad stuff."

The core of my version is that Alice represents Africa (not because the dancer playing Alice happened to be black, though that doesn't hurt the metaphor), and the whole performance is about the place of Africa in international politics, and how the continent remains under something of a post-colonial yoke, abused and controlled by the world's great powers. My first big clue was the White Rabbit, who was fairly neutral and disinterested in the original story; he was just trying to sort out his own life, and Alice kept following along behind him. In this version, he was distinctly sinister, giving Alice/Africa small treats, but clearly also someone to worry about. And compared with the other players, the White Rabbit was quite subtle, almost a background character, not yet very clear to Alice and so poorly understood. Clearly, I thunk to meself, the White Rabbit here can only represent the expanding influence of China.

After that, the rest all fell neatly into place. The Queen of Hearts and her entourage clearly represented the US (or perhaps the West, more broadly), dominant, powerful and arrogant. This American faction was divided into two groups. The first, the Queen and her burlesque dancers (I don't recall them from the original story, but you never know with Lewis Carroll), represented the misleading attraction of the US. Pretty on the surface, maybe, with its Hollywood glamour and American Dream, but beneath that, simply brutal, executing prisoners like some tinpot dictatorship and thinking nothing of completely dominating Africa. The other half, the break-dancing/capoeira Playing Cards, stood for the military-industrial complex. Aggressive, dangerous, mechanical. Couldn't have been more plain. (The fact that Alice can so easily knock the cards over is perhaps a reference to how flimsy American might has proved to be in Vietnam, Afghanistan and Iraq, suggesting that Africa is only dominated by American interests when it allows itself to be.)

Then there were the guests at the Mad Tea Party. Fun, vibrant, silly, but ultimately powerless any time outsiders butted in. This whole party represented the way outsiders see Africa; a bunch of traditional dancers and tourist-pleasers, good for movies like The Lion King or Born Free, good for nature documentaries made by old white men, but not to be taken seriously as real political players on the international stage. Alice can distract herself in the tea party mentality for a short while, but soon reality (the Queen of Hearts) arrives and shows how unfeasible it is for Alice to pretend she belongs at the party.

Finally, there's Alice's boyfriend back in "reality." In fact, he is the fantasy, standing for the rose-tinted view many modern Africans have of pre-colonial African culture and politics, with a manly man in charge who Alice needs to make her complete and happy, but who was really mostly a paternalistic, despotic mess in most historic cases (Shaka Zulu being a prime example). And sure, some parts of the old boyfriend/pre-colonial culture might have been nice, and it might be worth looking for the same qualities in someone/something new, rather than just taking a cookie-cutter culture from elsewhere in the world. But that doesn't mean the old boyfriend/culture wasn't also bad in enough ways that it's better for Alice to move on now. Her pining for a false past distracts Alice when she should be focusing on the Queen of Hearts and White Rabbit, and she suffers as a result.

A masked ball starts up from nowhere, standing for the secrecy, indirectness and two-facedness with which a lot of international relations happen. The Queen and White Rabbit, openly hostile before, are happy to play nice so long as the masks are on, and there's no immediately obviously risk to Alice. But, of course, it really is all quite nefarious underneath the metaphorical and literal masks.

Suddenly, the single, subtle White Rabbit turns into swarming dozens of White Rabbits, now directly confronting Alice and dominating her directly. This does not end well for Alice. I'd surmise that this was meant to be a prediction that eventually China's presence will stop being subtle and indirect, once all the political dancing is done, the US/the West is out of the way and China can swoop in directly, taking what it wants without any serious resistance.

As I say, I'm apparently the only one who read the plot that way, but I think it's so much deeper and richer than anything the Uj Dance Company likely had in mind. I think if anyone was putting together dance shows as deep as I imagined this one to be, and as well performed as it really was, then I might do this sort of thing more often.

It also suggests there's much, much more that could be done by the PhD dancers.
at 19:05 No comments: