A Week of Disappointment

And so, A Week 2012 ends, and I'm not overly impressed with the participation. Just on my own friend list on Facebook (which is not a good sample size, but is my quickest, easiest measure), only half a dozen A's appeared in profile pictures, and initially most of those were first-time participants, though a couple more caught up when I posted a mid-week reminder. That's hugely disappointing compared with A Week 2010, where over a dozen (my memory's fuzzy, but definitely more than 12) friends took part. This means at least 8 or 9 of them just aren't taking part anymore, and that annoys me. It suggests that they didn't really buy into the point of the project that first year, that it was just some sort of fashion fad to them, and now it's suddenly too much effort for them to go to the massively difficult length of changing their damn profile pic for a week. What a hassle!

Even the 2010 participation was relatively disappointing at the time, because most of my friends are non-believers. It shouldn't have been 12+ people, it should have been 120+ people. Weirdest, to me, are those people who responded to my last blog post very enthusiastically, saying what a good idea this is, but who then failed to change their pictures. Being annoyingly trendy I despise, but understand. But being passively enthusiastic, with such a trivially easy thing, is beyond me.

I was also surprised at how little support A Week seemed to get in the SA Skeptics FB group, which often seems to be treated as more of an explicit anti-religious group than just a pro-science group. I even noted someone there mocking the concept of A Week, but some weird, anti-social shift has definitely occured in that group's membership. That's a story for another post; for now, I just find it odd that hardly anyone there participated in A Week.

I thought I'd argued reasonably well last week for the small, subtle, but important goals A Week should be trying to aim for: Emotional support for isolated non-believers, first and foremost, and a shift in the public perception of atheism by making it more clear just how common and 'normal' a position it is. This is not a social volcano, suddenly and dramatically exploding established norms, but social erosion, gradually reshaping the landscape, one of the few cases where armchair activism can amount to more than just slacktivism and lead to some actual (if slow) change. Even so, the erosion would be more effective with broader participation. Perhaps some people lack the patience or vision to take part in that.

On the plus side, my personal thanks (for what it's worth, i.e. $17.62) to those who did carry on showing their A again this year and to those who took it up for the first time. I hope next year we can start expanding, rather than shrinking, perhaps bringing a bunch of backsliders back into the project.

(Note to self: There were some mid-week complaints of insufficient warning. Do a post about it a couple weeks in advance next year.)
at 23:03 No comments: 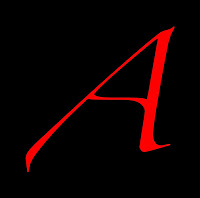 Ah, A Week! My 5th favourite holiday-that-isn't-a-day-or-holy of the year.

A Week, which I assume is short for Atheism Week, but which could just as easily be Agnosticism Week, Afairyism Week, Anunicornism Week or Abullshitism Week, skirts a little bit close to the "atheism is just a religion" line, but I think stays safely on the practical necessity side of it. The idea is for godless heathens on social networks to set aside their usual rejection of any shared, unifying identifiers, and instead all display a nice, big, clear letter A as their profile picture for one week a year. The main purpose of this is to let physically or socially isolated atheists quickly and easily see where they might find some sympathetic ears, or at least to give them some hope that they aren't totally alone in the world. It can be hard to imagine if you've never felt that sort of isolation, but any little bit of contact with the somewhat-like minded can mean a lot.

A secondary purpose (as far as I'm concerned, anyway) is to put a dent in theists' assumptions about their dominance and prevalence. It's easy to assume that everyone is like you, especially when the ones who are different specifically reject going out of their way to look different and distinct. And that assumption can feed a terrible arrogance and lack of self-questioning. Shaking that up every now and then is good for everyone.

Both those things together add towards making public atheism more socially acceptable.

Sadly, not enough atheists embrace this event. Some of the hardcore very-very atheists feel that anything that paints us as a unified group takes us one step too close to acting like a faith-based organisation. This is a mistake; all movements, even the informal ones, have to operate by procedures of some sort, and if a procedure is good and useful, most or all of the time, then why shouldn't most or even all people adopt it? That's practical and logical, not group-think faith bullshit.

On the opposite end of the scale are the softcore wishy-washy atheists, those who really don't believe in any gods, but who feel social pressure to keep this to themselves, or who don't want to be associated with the more shouty, "angry" (as they are often falsely called) hardcore atheists. This is also a mistake; if you don't publicly claim your own identity and shape it more to your liking, then you have only yourself to blame if you're judged according to the behaviour of others who share that identity, but use it differently to the way you would. Take charge for once, and carve out your own niche in the public perception of your lack of belief. Show by example how there are different ways of playing it.

And besides, think of the poor, isolated atheist kids stuck in some strict religious community! It's so hard to say whose A Week participation will be the one that reaches them, but the more people who take part, the better the chances. Surely your (perhaps perfectly valid) personal concerns are worth overlooking for just one week, in order to give them a bit of hope?

The only important thing is that you don't take religious claims seriously (even if you feel there's still some reason to take religious people seriously). If you're not convinced that there's really any supernatural magic person or people in the sky (or wherever your local faith likes to store them), then you're atheist enough, and this is as good an opportunity as any to let people know about it.
at 21:00 No comments:

Consilience #43: Featuring another copy of Me!!!

I'm audible for a second time! The Consilientists asked me to be a guest host on their podcast again, and I think it went pretty damn well once more. It all felt a lot smoother and simpler this time (if we ignore the fact that the recording had to be postponed almost a week after Angela broke her entire leg clean off when a flight of uranium-235 stairs collapsed on top of her and she kicked the rubble off of her with so much force that the leg flew right off, approximately), and it was great fun for me once again. I guess I had prepared my own contributions a little less thoroughly this time, but it still sounds alright to me.

Also, post-script story of interest: I got caught in a massive storm on the way home from the recording, so bad that I couldn't even recognise the road I drive along every time I go to work and have been using frequently for decades even before the current job. With full windscreen wipers, full de-mist, brights and hazard lights on, I couldn't see more than a meter or so ahead of me, and neither could I see the edges of the bridge I was crossing. It's lucky it was a two-lane road with nobody else on it, as I couldn't even tell what lane (if any) I was driving in. I pulled over as soon as I was safely past the bridge, but for some reason about a dozen other cars carried on past me, ignoring the danger. Or maybe they were ghost-cars...!

You can find the file and the show notes here:
http://consiliencecast.wordpress.com/2012/03/01/episode-43-stem-cell-burgers-jesus-toast-and-legless-frogs/
at 21:28 No comments: