I've been a very, very busy lad. Teaching full time is very definitely actually full time, and finishing my work day at 16:00 rather than the conventional 17:00 is mainly a safety measure designed to keep me from frying my brain completely. I get no breaks, and most of the time I don't even get a seat. But I'm loving it, and I get the impression that most of my kids are enjoying my lessons.

But I've preserved my weekends and evenings (perhaps even trying to cram too much into those) and it's been a socially very busy time too. DeeTwenty [EDIT: I no longer associate with DeeTwenty and can not endorse it in any way] has become my second home, a great place to roleplay, to play with shooty pew-pew spaceships, or just to hang out and watch movies; I only wish that certain people (who know who they are) would settle their differences and restore the unity of my social circle once more. Obviously my personal convenience and enjoyment is the most important thing here.

But I'm also in a D&D group that has not (yet) used DeeTwenty as its venue. We're using the Pathfinder rules (which I'm not massively keen on, yet I've spent oodles on its rulebooks) to run a whole lot of 2nd and 3rd edition Forgotten Realms adventures. It's been great, and the group is very experienced and fun, including some players (and the GM) who I've been roleplaying with since high school.

And this brings me, slowly and convolutedly, to the point of this post. My main character in that game, Ploon Kloovs, is a true-neutral gnome alchemist, and true neutral is a bit of a tricky thing. D&D reduces all questions of ethics and morality down to 9 basic alignment guides, based on a 2 dimensional wossname. On the one axis, there are the extremes of good and evil, with neutral between them. On the other axis, there is law and chaos, with neutral between them. Any character or monster's moral alignment can be described by its coordinates on each axis, e.g. Lawful Good, Chaotic Evil, Lawful Evil, Chaotic Neutral, Neutral Good, etc. True neutral is the exact center of both axes, a.k.a. Neutral Neutral, or simply Neutral. It's an oversimplification of real behaviour and real rationalisations (or lack thereof), but it's supposed to be used as a tool to help broaden and deepen character roleplaying, a flexible guide, and not as a rigid straitjacket of predetermined behaviour. 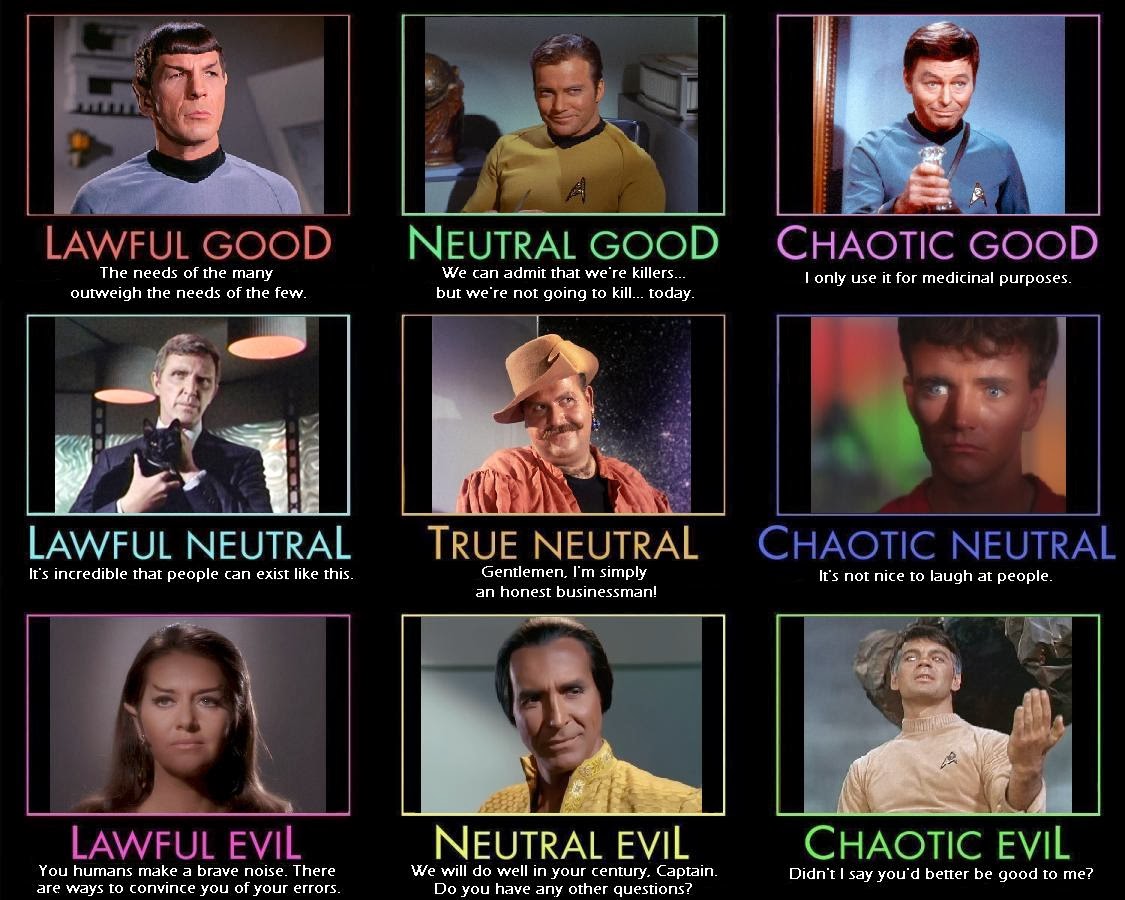 It's a harder one to play than any other alignment, except maybe Chaotic Neutral, because it can be hard to distinguish between Neutrality and Chaos (since both represent some absence of clear and obvious Law), and it's hard to intentionally create genuinely chaotic behaviour. The trouble, I think, is that True Neutral really represents two different sorts of behaviour.

On the one hand, there's passive neutrality, neutrality that results from failing to engage with the world one way or another. This is usually the alignment of unremarkable, unnamed background NPCs, the generic peasants who technically exist throughout the Forgotten Realms, but who nobody's ever likely to interact with. On the other hand, there's a more active neutrality, where bold actions are taken, but then balanced out by equally bold actions in the opposite direction, resulting in a net moral effect close to zero. This later model is probably more appropriate for player characters, who have to act in some way or else they might as well not bother being present.

So this is how I've been playing Ploon, with the more active sort of neutral, and it seems to be confusing and frustrating the hell out of the other players. They happily accept it when he lends a hand fighting evil vampires, but object when he tries to steal and destroy their pet vampire. They're annoyed when he insists on checking on the safety of an obscure village that merely has a slightly odd lack of spiders, but pissed off as fuck when he wants to wipe out every living thing in a market place. (To complicate matters further, Ploon is pretty openly racist, a firm and active believer in gnome supremacy; at the same time, most of his adventures end up helping humans, elves and others more than any gnome.)

To an extent, it makes sense that the other player characters would have a problem with Ploon's actions, since they all have different alignments and different goals. It would be weird if the other players all played their characters as fully accepting and appreciating all of Ploon's actions. But beyond that, I think the other players have some out-of-character problems with the concept, with some telling me that they find Ploon to be simply chaotic, not neutral. But this simply isn't so: I have strict rules by which I decide how I'm going to direct Ploon's actions to fit his neutrality, and he's definitely, definitely followed the letter of the law just as often as he's ignored it. I manage this by keeping a running tally of every good, evil, lawful and chaotic action he takes, and I intentionally aim to keep them balanced. I think the other players only notice this when Ploon does something inconvenient, and they're less likely to find lawful and good actions so inconvenient or objectionable - though there was that time Ploon insisted lawfully and goodly on offering the +5 Sword of Awesome back to its rightful owner, when another player character wanted to keep it for himself.

I don't think True Neutral is the sanest alignment to play, and certainly not the one most conducive to party unity. It's also clearly not much like me, as I don't like massacring merchants and every time I take an internet test to tell me my D&D alignment, it comes out as Neutral Good. But it's certainly a fun challenge to play, worth a try every now and then. The trickiness of balancing exactly in the middle is, if nothing else, a good way of learning to tell the other alignments apart more clearly. And one interesting thing is how little a lot of people distinguish between them when deciding who to swing their swords and spells at; being a game of hitting things a lot, there's a lot of (quite enjoyable, as fiction) brutal violence, and it's a hell of a stretch to argue that much of it is really valid as any sort of "good" behaviour, whatever may be written on the top of the character sheet. This was further revealed when Ploon's Neutral Good cousin Zook appeared for a few sessions and merrily talked her way through several conflicts without the need for drawing a weapon. The other players present found this a bit odd and surprising. Perhaps that revelation is what bugs them most?
at 21:46 No comments: