23 April 1967, 50 years ago today, the first crewed Soyuz spacecraft launched. Three days ago, the latest crewed Soyuz spacecraft launched and docked with the ISS. We've been flying to space in this same design for a full 50 years now, and more of them have been built than any other type of spacecraft by a huge margin - it's the VW Beetle of human spaceflight. Uncrewed test launches of Soyuzes had begun in November 1966, so by that measure, Soyuz already passed its 50th anniversary last year. But I'm more inclined to measure crewed spacecraft by when they're actually inhabited in space. 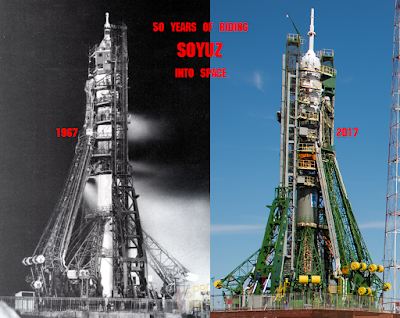 The closest any other crewed spacecraft comes to that longevity is the DOS space station core module (reaching its 46th crew-carrying anniversary this June), which featured in most of the Salyut space stations and the Mir space station, and is currently part of the ISS. Soyuz and DOS were designed to work together, so it's appropriate but remarkable that they're still doing so today. You'll see in the visual history below how much the two vessel types have been connected.

By coincidence, today is also the 46th anniversary of Soyuz 10's unsuccessful docking attempt with Salyut 1, the first Soyuz-DOS meetup in orbit. Later this year we'll see the 60th anniversary of the R-7 family of rockets, the oldest orbital launcher there is, variants of which have launched all crewed Soyuzes and most uncrewed Soyuzes, plus all sorts of other things.

The longest serving US spacecraft, the Space Shuttle Orbiter, lasted 30 years, and the 5 of those that were built got into space 134 times, accruing a total spaceflight time of just under 1 331 days. Flying only once each, 132 Soyuzes have gotten their crews into space 132 times so far, adding up to 14 956 days of human spaceflight time, and counting. Nine more Soyuzes are scheduled to launch, keeping them in use until 2020. Adding in all the uncrewed Soyuz and Soyuz-variant launches more than doubles the number of times the Soyuz family has flown; there were no uncrewed Space Shuttle flights. So, it's not the simplest comparison.

The second most numerous spacecraft design was the Apollo CSM, of which a mere 15 were launched into space with humans on board.

And while the latest version of Soyuz is definitely modernised and digital, it's also still clearly very close to its original 1960s form; consider below the full evolution of the Soyuz:

Note that I've included more than just the crewed versions. Soyuz has been around so long, it's been mutated into a few different forms - most import of all is undeniably the Progress cargo vessel. I've also included China's larger Tiangong spacecraft, which was intentionally based on the Soyuz layout, and operates in a very similar way. It is arguably part of the Soyuz family.

One weird thing going through all of the Soyuz missions brings up is how openly sexist the Soviet and Russian space programs have been. Hundreds of people have travelled on Soyuzes, but only 3 of them were Russian women (less than 1 per decade!), and no Soyuz has ever had a woman commander. There are plenty of stories floating about of nasty sexism in Soviet/Russian spaceflight, and they even chose to put it in some of their public relations videos. One case leapt out at me from the Soyuz TMA-11 near-disaster, discussed towards the end of this post. The Roscosmos general director at the time publicly blamed the fact that the vessel concerned had too many women onboard (one American, one South Korean), and said he'd work to prevent this from happening again. You don't joke about crap like that, but I suspect he wasn't kidding.

Because Soyuz has been around for so long, it's hard to discuss absolutely every flight and every crew. At the same time, one of its virtues has been how uneventful and routine most of its operations have become. I think the best way to celebrate this 50th anniversary is a simple visual history of some of the major Soyuz moments. Even condensed this way, it's still a lot.

1966-11-26 (no image available): Kosmos 133, the first uncrewed Soyuz test vehicle, launches. It malfunctioned in orbit and was intentionally destroyed before it could crash. Two further uncrewed test launches followed, both with serious systems failures.

What strikes me in all of this is that Soyuz is almost never the hero of the story, especially when it's working properly. Early on, it's not really doing too much very groundbreaking, compared with the drama of the first few years of the Space Race, or the ostentatious Apollo Moon missions. Soyuz was originally conceived for Moon missions too, and then had that taken away. And later on, when Soyuz starts servicing space stations, the stations are most often the center of attention, not their little support craft. The little bit of limelight Soyuz has had since 2011 often comes from (or draws in) angry Americans, raging that they're now forced to hitch rides. They don't seem grateful that old Soyuz is still keeping things moving forwards. But that's the main accomplishment of Soyuz: In a series of tortoise-vs.-hare contests, it's been the sure and steady tortoise.

The unclear meaning of WMD

I wrote an essay back in varsity that led to me co-authoring my one and only published journal article. The essay and article weren't that similar, with the article focused on socially constructed meanings given to nuclear weapons, while my essay had been about weapons of mass destruction in general, and had taken a more elementary look at what these weapons physically do and what this meant they had in common (or not).

A quick look at the standard legal definitions of WMD explicitly holds them to the level of destruction of a nuclear bomb, and yet biological and chemical weapons employed in reality just don't get that destructive. No single device built so far gets as destructive as a nuke (causing somewhere close to hundreds of thousands of casualties from one explosion in a population center, possibly more; the definition will vary with location and situation). That's why they're so scary. In comparison, individual chemical weapons have never caused comparable harm, and even sets of them used together have still fallen orders of magnitude short of nukes. Biological weapons remain mostly useless (compared with both nukes or chemical weapons), a dangerous concept to prepare for in future, rather than a practical reality today.

This doesn't diminish the destruction caused by smaller devices. It also doesn't diminish the cumulative destructive potential of large numbers of small devices (if we're not strictly talking about the effects of a single device, then any army, collectively, is automatically a WMD too). It just means the legal definition is very fuzzy or very stretched.

One possibility this fuzziness opens up is that some very large conventional explosives might legally be classed as WMD. They still won't reach the level of even very small nukes, but they can easily exceed the damage done by the chemical weapons that are already classed as WMD. That, to my non-lawyer mind, would seem to imply that large non-nuclear bombs ought to be considered WMD too (or that the definition needs a major rebuild).

These thoughts came back to me this week, as Syria appears to have made another chemical weapon attack, and the US has dropped its very largest non-nuclear bomb. I can already see the media (and thus the wider public too) getting mixed up about the nature of WMD, and what to do about them. This sort of confusion only makes it harder to discuss intelligent de-escalation or the hypocrisy of violent "peacekeeping". Whether the formal legal definition of weapons of mass destruction changes or not, it may be wise to push the term out of widespread use. It doesn't seem to serve a useful conversational function, and it invites a lot of misleading double meaning.
at 14:20 No comments:

A quick gender analysis of TableTop

I've been slowly catching up on season 4 of TableTop, now that I have a little free time, and I got as far as the episode on Dragon Farkle. What leapt out at me about it was the all-male cast, and this got me thinking that I'd been seeing very few women in season 4. That would be disappointingly unrepresentative, especially for a show that's so far done a great job of showing varied men and women enjoying boardgames together. And among the guys in early season 4 are Tim Schafer and Andy Weir, which was an absolutely fantastic surprise combo for me. But I also wouldn't want to ignore a problematic change in the show, if it was a real change. But how to be sure? Maths!

It was 5 minutes' work to scan through the episode list on Wikipedia, which conveniently lists each episode's guest players. I made a little spreadsheet, sorting the players per episode by apparent gender (which at this distance looks like simply Boys and Girls; a more thorough analysis might split those numbers up further). And that very rushed spreadsheet yielded this graph of gender representation per episode:

Note that the host, Wil Wheaton, is counted as a player in all of these episodes, giving an automatic +1 to the boys (hence the solid blue bottom of the graph); more on this below. Note also that series co-creator Felicia Day also steps in as a guest player occasionally, and I've marked all of her appearances with the symbol F. The standard show format features Wil plus three guest players, and exceptions to this are rare (about once per season). Two-parter episodes come up once or twice per season, but I've counted each of these as two separate episodes here. If the point is to test representation, then getting twice as many appearances as in a single episode should be counted as such.


It would be fruitless to look for the 50/50 gender split without including Wil Wheaton, because of the standard four-player format.

I definitely wasn't crazy to notice a shift away from women guests in the early part of season 4. Episode 4-3 is a brief exception, and then there's a string of mostly-men episodes for a while. But the good news is, season 4 over all is much better.

There are arguments in favour of either including or excluding Wil Wheaton from our count. But either way, the trend is headed in the same direction.

I have no idea if this is intentional on their part or not, but at least it satisfies my initial concern. Things look sane and reasonable.

One final observation: Appearances by Felica Day seem to be less common over time. That's a pity, because I always enjoy her participation, but I suppose this means they're finding it easier to find new people to fill out their casts.
at 21:46 No comments: