The least worst thing about Trump

There are plenty of bad things to say about Trump, and he keeps working* hard to produce more. He may not end up being the worst US president of all time (Jackson set a very low bar, for one easy example), but he's easily got to be the least qualified, least suitable they've ever had. I want to be clear that I'm no Trump supporter, and that this post is not at all a defence of the man. There's just so much to hold against him; I won't bore you by listing it all here, when so many other sources have been doing that for years already. But there's one thing that (mainly American) commenters regularly bring up, when they want to illustrate how awful he is, which I have a little trouble with: Bone spurs.

It's a matter of public record that Trump evaded the US military's draft during the Vietnam War, first through educational deferments, and then through a medical deferment for bone spurs in his foot. That diagnosis doesn't seem like a very compelling excuse, and it's easy to use that to say that he's a coward. And he almost certainly is. I don't think that's bad. This isn't the neolithic, we don't need a big strong manly man to be village chief and protect us from fearsome monsters we don't understand. Today we understand there are no unknown monsters left in the wilderness, it's just us against ourselves now, and the remaining violent manly men are the monsters among us. In 2017, leaders who fear violence are the most sensible, sane, useful choice, provided they extend their caution over all of us, and not just selfishly over themselves. We want more of that sort in office, and pushing in the exact opposite direction seems like overkill.

So our instinct to mock and reject cowardice of violence is outdated, and can even be harmfully counterproductive.

The issue is complicated, I'm aware, because Trump's draft dodge represents additional things, beyond simple, sensible aversion to violence. The fact that he got away with it, when thousands of others without his wealth couldn't, highlights the unfair class and race exploitation of the draft. Plenty of far more deeply convicted pacifists were forced into war (or jail) because they couldn't afford the legal and medical experts needed to fend off the system they lived in. And since then, Trump has shown that he's not at all opposed to other people having to live with violence and death, so long as it's far away from him. He may be a coward, but that doesn't make him a man of peace. He's clearly something of a hypocrite in this area.

What's maybe a little weirder is that the US right wing is nominally the pro-war side of US politics (though there are plenty of pro-war Democrats, to muddy that divide), and it ought to be incongruous that Republicans would select a draft dodger as their chief. Perhaps that's why critics keep throwing this criticism at him, hoping it'll turn his supporters against him? If so, it clearly hasn't worked, and instead it will almost certainly make life a little harder for genuinely anti-violence US politicians for years to come.

It's a weird situation. His draft dodge attempt may not be praiseworthy, as it was for most others. But it still doesn't seem entirely as awful as it's been portrayed over the last couple years. Would we really be happier if history had gone differently, and a young Trump had been handed a gun and told to shoot people? (Army duty certainly didn't make Hitler into a better person...)

I'm inclined to say this particular criticism works out somewhere close to neutral, in the end. I think it was a perfectly acceptable, rational personal choice at the time, but he's not used his privilege since then to pass that sane option on to others. I wouldn't say avoiding the draft necessarily makes him good, but I also can't easily say that it makes him awful. It's the 965 other far more valid criticisms of him that make him awful (including his subsequent hypocrisy), and this one specific bone spur criticism is kind of unnecessary. It's one of many things I will be glad to be rid of when he finally goes.
at 23:01 No comments:

I've been thinking for a year or so that RoboRally ought to be an excellent tool for teaching the mathematics of transformations. I've already drawn a connection in class between the motion of computer animation (in games and movies) and the geometric transformations we've been learning, and many of my grade 9s get that link quite clear in their minds. But for other students, computer animation is a form of change they're not too used to, or haven't looked at closely enough.

RoboRally's step by step motion gives a good look at similar transformations, and at a slower, more deliberate pace. Players need to think through each move, one at a time. The direction a piece is facing is also relevant (which makes rotations important), which isn't so in many other boardgames. In chess, for example, non-pawn pieces seldom care what direction their previous move came from, they can just go off in whatever new direction they like, instantly changing facing. And pawns, at the other extreme, are too directionally limited, with no chance to rotate at all. But the robots in RoboRally must be intentionally rotated, if they want to change direction. There's also the hope that exploring transformations will help to solidify students' grasp of Cartesian planes in general. 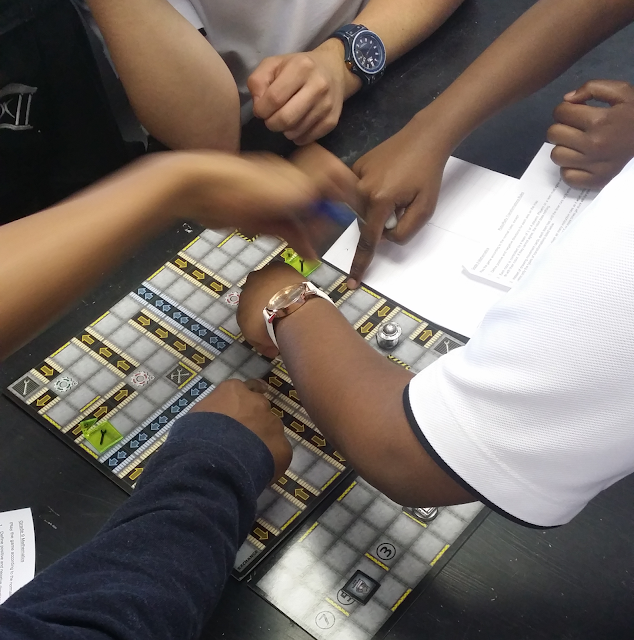 And better still, RoboRally is fun. The time pressure, the competition, the risk of blowing up or crashing off the edge, the lasers (pew pew pew), all make the simple act of moving a lump of plastic from A to B more exciting and compelling.

To make it most useful for my grade 9 maths class, I modified the rules and made it a team exercise. I stripped out any optional extra rules, to keep it as simple as possible, and I also replaced all of the cards and tokens with pen & paper, to reduce the chances of my game components getting damaged or lost. But the biggest rule change was replacing the random draw of order cards, with a free choice of translations and rotations, so long as they are accurately written in the correct format, as used in normal exercises.

This retains the two major sources of conflict in the game: Unpredictable, unexpected clashes between different robots' preset plans, and accidental errors in one's own planning.

I found time today for one test game, and while some of the kids were initially uncertain about a lot of it, one or two practice rounds cleared that up, to the point that they were almost all really into it by the end. The winning team were some of the kids who started the game complaining the loudest that they didn't get it. In the final round, they were laser-focused and knew exactly what they were doing. Some of the others, who were very confident early on, learned a series of lessons about how easy it is to accidentally write down the wrong sign when there's time pressure, and they rolled confidently off the edge of the map into the oblivion beyond.

I've seen plenty written about the gamification of learning, and I think a lot of it isn't really suited to older students (who are nominally my main focus), so I haven't explored that much. But as I seem to have a long future of teaching juniors ahead of me, I'm starting to think that I'll have to give gamification some more thought.
at 22:22 No comments: