As mentioned recently, my group and I are playing through the Enemy Within campaign for Warhammer Fantasy Roleplay, and we actually started them out a little earlier than that with the equally good (though approx. 5 times shorter and more sane) Dying of the Light campaign, which is also blessed by the touch of James Wallis. So we've been carrying on with one continuous storyline since 15 March 2010. As I publish this, I've just come home from the 50th session of that game. It's far from the longest roleplaying campaign ever, and we have been playing various other things in between too, but 50 sessions with one unbroken thread is a new personal record for me and it's pretty damn unusual for the short-attention-spanned people I usually play with. I'm inclined to celebrate this, not least because they've been 50 very fun sessions, and because we're still only roughly halfway through Enemy Within, so there's still lots more to look forward to.

Of course, player groups inevitably change over time. Some people move to Canada. Some people have job or family commitments. Some people didn't really fit in well from the start. Some people are my evil arch nemesis, plotting my downfall with every waking moment. I probably shouldn't have invited that guy. But there are always enough experienced characters left over to get the new ones up to speed, to pass the proverbial torch, and I was luckily able to attract most of the Dying of the Light crew over for a transitional episode that provided excellent continuity at the start of Enemy Within. It's worked out very, very nicely.

But there is one particular player I have to give special credit to: Alex. Over the last 50 sessions of Warhammer Fantasy Roleplay, Alex has been there for all 50. He is the non-load bearing, spongy backbone of my group, and I doubt I would have carried on preparing the game for this long without the reliability of Alex. He's also managed to keep his current character, Alric Konrad, alive and active for far longer than is probable in the Warhammer world, especially considering all the shit Alric's been through. I should be clear that Alric wasn't Alex's first character in this campaign, though. His predecessor, Peter Peters, lasting 9 sessions, was pretty similar in that he was a blatant, unapolagetic thief. But Peter Peters (Pumpkins Eaters) was executed by his own party halfway through Dying of the Light for admitting to being a Chaos-worshipper, and I think there was also something about trying to use one of his comrades as a blood sacrifice. I try to stay neutral in (admittedly valid) intra-party conflicts.

Alric Konrad had joined the party after that, as a mere tagger-on to another new character who had a much better reason for joining the party at that point. And yet Alric went on to become a much more central character, helping to foil multiple Chaos demons, both lesser and greater, and stealing more gold than the Empire is supposed to have. He and the second longest lasting character, Adelyn Zumwald (35 sessions) even managed to steal, by subterfuge, a whole fucking castle! Naturally, because this is Warhammer and not D&D, Alric isn't actually that much better off for all this. He's lost about half his wealth to disaster and robbery (by fellow party member Adelyn, primarily), he's increasingly full of persistent scars and maladies, and he's simply not welcome to show his face in half the towns he's saved. And the castle he so cunningly stole was immediately destroyed, the falling debris almost crushing his trusty barge (which was burned and sunk shortly afterwards anyway). This is Warhammer as it is meant to be played.

To formally acknowledge Alex's achievement, I sat down to make a model of Alric Konrad for him. Warhammer roleplaying has the enormous advantage that it can borrow miniatures from Warhammer Fantasy Battle (and a few smaller games, like Mordheim), and yet we've never really done much with that. I provided half a box of Empire militiamen, as the most likely generic bits for typical human adventurers, and we've always had some temporary figures slapped together roughly out of those. And where convenient, we've taken whatever figures from people's armies happened to suit a given character, with a fairly broad margin of imagination. We've had 40K orks standing in for goblins, horses for wolves (or was it vice versa?) and chess pawns for random human cultists. We're talking about a campaign that now has a cast in the literal hundreds of named NPCs, so we're not fucking custom-building the lot.

But apart from that, we've only ever had three serious figures built to represent specific characters. The first was a child I made myself, entirely out of green stuff. She was my first attempt at modelling something from scratch, and I'm reasonably pleased with her, even if I could probably do it much better now. Her little nose kept falling off and her over-sized head sagged oddly as it set, giving her as much of a rag doll look as the rag dolls she carries. The other two were Scot's 2nd and 3rd characters, Alric Reiss and Grombil, a human priest and dwarf fighting thing, made by Scot. He made good, conventional models, but didn't keep to his characters for particularly long stretches, which seemed a bit of a waste. Brother Alric Reiss, in particular, was a really nicely done model. 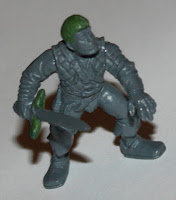 But I digress: Alric Konrad. I started with a simple Empire free company militiaman figure, chosen mainly for its beardless face and slightly skulking, thief-like pose. Alric's character portrait is literally Garrett from the Thief games, so I had a fair bit of modification to do. Step one, using green stuff, was to give the bald figure some basic hair and to extend the puny crossguard on his sword to better match the picture (at right) we have of the magic sword Alric acquired not too long ago (one of the few valuable items he definitely didn't steal, oddly enough). I also whittled at the blade of the sword a bit, to give it straighter sides. My crossguard is obviously too thick and chunky, but this is kind of unavoidable sometimes at this scale. 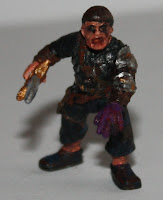 Next, I painted him up all pretty. I knew I was going to end up covering more than half of that with his cloak, but I couldn't guess exactly which parts would remain visible, and it was easier to just paint them all in one go before the cloak went on. It was tricky, with everything in shades of black. The shoes are brown-black, the pants are blue-black and the top was originally mainly green-black, until I decided some subtle silver dry-brushing might be useful for implying either stealthified metal armour, or rain-slick leather, both equally likely for Alric. The face was meant to look a little rough, but in photos I decided it was perhaps a little too rough. Also, that purple left hand? Intentional. It's a plot point, I won't spoil it for anyone. 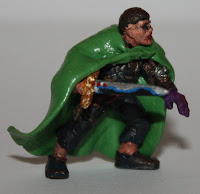 Then came the cloak. I've made enough encloaked dwarves to know how these go, but I wanted something a bit more actiony, showing the cloak as something flexible and real, not just another layer of protection. The little flare on its right corner really pleased me, but I had to make the whole thing pretty damn thin to get it looking realistic, so I think it's likely to be the first thing to snap if anyone's ever rough with it. I decided to add the hood separately. I forget why, but it worked out well enough in the end. This view also shows off the magic partial "invisibility" effect of his sword, which the book describes as shimmering back and forth, leaving only the glowing dwarven runes on it visible. 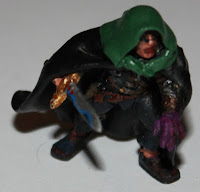 I painted the cloak black, just to get a feel for it, and to fill in the shoulder bits that would soon be hard to reach with the hood in place, and found it really hard to cover up the green in every nook and cranny the cloak had created. There may still be some sneaky green hiding behind a knee or something. The hood came next, and it really bothered me, because hoods always worry me. They have so little defined form, and yet it's easy to say when they look wrong or unnatural. But I feel uncomfortable with real hoods in real life for similar reasons. They're just not very practical, are they? But, it's an established part of Alric's look and of thieves in general, so I did my best to shape it right. 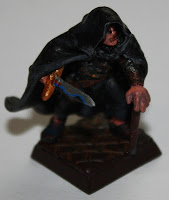 Texturing the completed cloak was surprisingly easy (it got to be simple grey-black) and all that remained was putting the whole thing on the base I'd prepared for it, as well as fitting in the cane Alric walks with (ever since that building-sized crab crushed his leg...). The cane is the whole reason I'd chosen that rare, plain, unoccupied left hand, quite unusual among miniatures where nearly everyone seems to be ambidextrous. I guess now it is occupied. The cane itself was clipped from a dwarf standard's pole, then whittled into a more sticky shape. I "subtly" prodded Alex several times about the design of his cane, to make sure I'd build it right, but it seems all the complex stuff about it is... hidden. You'll also note that left hand ain't purple no more. Another plot development. 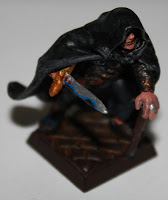 A final touch-up cleaned up some rough patches, especially the face, which I'd neglected til the very end. He also grew a silver ring, quite plain-lookin' at this scale, but which in the game marks him as a member of the Amethyst Order, which will mean something to those it means it to, and nothing to those it doesn't. It was significant enough that I added it as a modelled feature.

For display purposes, I took a clear dice box and glued a coin to the bottom of it, then green stuffed a small magnet under Alric's base. Not only will this keep him dust and scratch free, but it should also offer some protection against bumps and small drops, making it possible for Alric to travel with Alex to away games, although historically we've played at Alex's place most often. There's also amusement in having the thief sitting on top of a 'giant' piece of money. 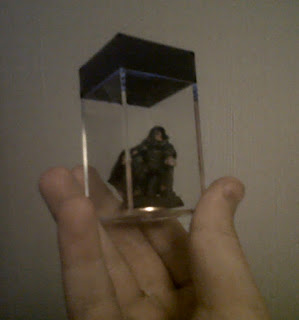 And for anyone interested in the base, it's green stuff-textured, with a pretty simple, realistic paint job, and with slight indentations made with his feet right at the start, so I could reliably get him back into the correct position again every time. Cobblestones make the most sense for Alric's largely urban shenanigans, but making it brown rather than grey makes it (hopefully) fit better in rural settings too, and even on the wooden deck of a boat, such as the party's previous vessel, the Ungenannt, or perhaps one day it's as yet unbuilt, unnamed successor. 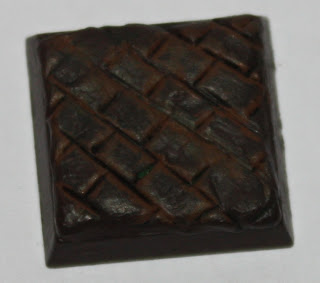