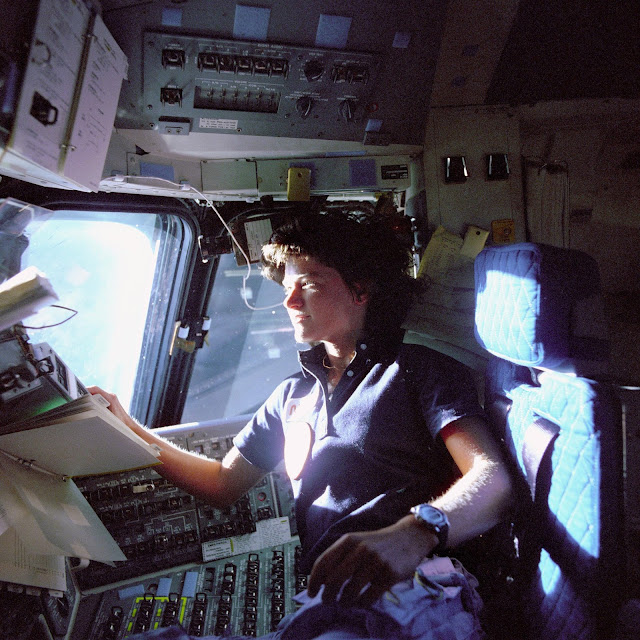 I got used to hearing Dr Ride's regular promo recording in most episodes of Planetary Radio, and it amused me that her name is coincidentally in the lyrics of Mustang Sally. It's also easier to like her because she had a real science background, not a military one, as so many astronauts do. But what really made me like her was that she used her status so damn constructively. I have no data on how successful her Sally Ride Science company has been, but the concept alone is praiseworthy: Getting kids excited about science at a young age. And it looks like they've not held their punches with topics the US sometimes struggles to accept, like climate change and evolution, so it's serious science they're promoting.

Her earlier association with the Center for International Security and Arms Control is also such a pleasant contrast with the distasteful military associations most other astronauts have. A bunch of them had gone to war and killed people, and there she was, looking for serious, intelligent ways to prevent war and not kill people. Much more sensible.

A lot of  astronauts retire to lives of comfortable tedium as "industry consultants" or some similar-titled position, which I gather usually means something like a PR pawn and/or political leverage pawn, with or without some actual engineering work to keep them occupied. Not many of the famous, big-name astronauts have used their big names for much good, and it's hard to suggest anything significantly better than promoting world peace and science education for kids, especially for under-encouraged girls.

You'd struggle to intentionally design a better role-model. Hopefully many will have already followed her lead naturally.
at 01:56